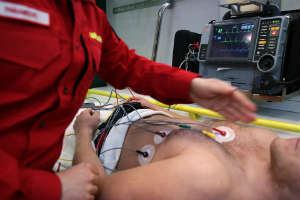 FULLERTON, CA – Early Sunday morning, a truck plunged right into a crowd of pedestrians in Fullerton. The horrible Fullerton accident left at least ten people with injuries. This information comes from the Fullerton Police Department.

Apparently, just before 2 a.m. Sunday morning, after the Saturday nightlife was wrapping up, a red Toyota Tacoma drove up onto a sidewalk. This was in the area of 100 W. Santa Fe Ave. Police point out that since the bars were just closing for the night at that time, many people had flooded the streets. The group on this particular sidewalk faced a traumatic evening.

When the emergency personnel arrived, they discovered the awful scene: several people trapped underneath the smoking truck. A witness stated that he saw multiple people, witnesses and police alike – he claims at least 50 – grab the truck in order to lift it off a body.

With the officers’ help, the group managed to free the trapped people from underneath the truck. However, those people faced many injuries. As a result, the injured people were taken to get medical care for their injuries.

Emergency personnel transported a total of ten people to the hospital, with a range of moderate to life-threatening injuries. The names of those victims have not been released to the public at this time.

However, police arrested the driver. They identified him as Christopher Solis, a twenty-two-year old of Anaheim. He was arrested on suspicion of felony DUI, causing great bodily injury. This is according to the Fullerton Police Department. Investigators believe he may have been under the influence of drugs. At this time, it is not clear exactly what happened.

L.A ‘s Most Vulnerable on the Brink of Homelessness