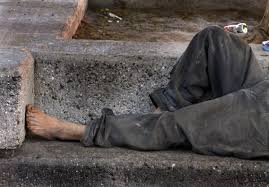 The number of homeless homicides within Los Angeles city limits rose again in 2019. 42 people living outside were killed in 2019.

That figure rises from 39 the previous year, 29 in 2017, and 22 in 2016, reports NPR. The homeless population of Los Angeles comprises 1 percent of the total population, or about 39,000 people. However, the homeless make up 17 percent of all homicides in the city.

“Everyone involved here is suffering from at least a minor form of PTSD,” LAPD Commander and Homeless Coordinator Donald Graham said. Two-thirds of homeless murder suspects are also homeless themselves. Tensions regarding property or territory exacerbate that, he explained to Anna Scott of KCRW.

The stresses of living outdoors and in poverty, often with medical issues and little access to healthcare, foster those tensions.

LA’s homeless population rose a staggering 16 percent this year over 2018. However, homeless homicides aren’t the only life threat for those living on the streets.

Almost 1,000 people without housing died this year. On December 21, homeless advocates gathered for National Homeless Persons’ Memorial Day, a vigil honoring them. Three days prior, on December 18, a homeless man in his 50s was found dead just outside City Hall.

The outgoing head of the Los Angeles Homeless Services Authority, Peter Lynn, struggled with the growing issue during his 5-year tenure. Speaking with NPR’s Ailsa Chang, he cited rising housing costs as the primary factor. “The core driver in Los Angeles is affordability. We have one of the least affordable housing markets in America,” he said.

As city and state officials alike work to confront the issue of homelessness, those without shelter struggle to survive on the streets of Los Angeles.