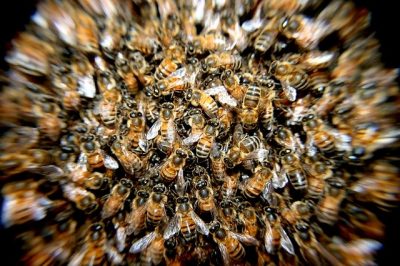 A swarm of an estimated 40,000 bees appeared Friday afternoon in Pasadena, prompting an emergency response from firefighters. Thanks to the actions of firefighters and a professional beekeeper, the bee swarm dispersed by the evening.

The situation began when a cloud of bees formed around a Howard Johnson Hotel on Colorado Blvd. The bee swarm sent five individuals to the hospital, albeit with non-life threatening injuries. The first responding firefighter suffered the worst attack, experiencing 17 stings.

Hotel guests and students from the campus located on the opposite side of Colorado were told to stay inside while firefighters dealt with the issue. Despite the warning, several students collected on a lawn behind police tape to watch. Luckily, no allergic individuals were attacked.

The firefighters fought back with a combination of CO2 and water, blasting the bee swarm hovering around the hotel roof. They extended a ladder to reach the bees atop the four-story building. Eventually, a professional beekeeper, Dave Williams, retrieved the sizeable hive attracting the bee swarm.

While some bees died, firefighters achieved the primary objective to disperse the swarm.

As for their sudden aggression, an answer remains out of reach. “Something set them off, some activity, noise, vibration… it’s hard to tell what,” said Williams. He also mentioned the hive likely included Africanized bees.

Often referred to as killer bees, Africanized bees occasionally lead to human deaths. Reports indicate perhaps hundreds of deaths are attributable to Africanized bees over the past 50 years. Despite the moniker, the Africanized bee tends to exhibit less aggression than other varieties, such as wasps. Instead, they mount an aggressive response when faced with a threat to their hive.

In such events, they collectively attack the perceived invader. While they pose a lethal threat to those with allergies, it would take about a thousand stings to deliver enough poison to kill an average adult.