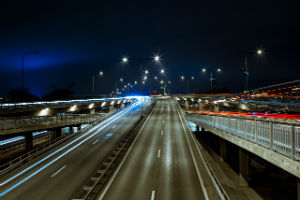 Currently, officials have not identified the mysterious man.

Specifically, witnesses claim the man walked in the middle lane of the northbound 110 freeway. The incident occurred near Slauson Avenue in the South Los Angeles area. Furthermore, officials report this happened around 8:40 a.m. on Thursday.

Also, the man carried a bag with him.

A witness captured dashcam footage of the man. The footage shows the man refusing to move to the side to avoid moving vehicles.

Fortunately, traffic remained slow as it was rush hour. So, cars swerved around the man to avoid hitting him.

He captioned the post, “Only in LA will you find a guy walking down the number 1 lane of the 110 N during rush hour and that’s not the reason it’s bumper to bumper traffic!”

The user commented further, “He had headphones in and was casually walking without a care in the world. People were just going around him”.