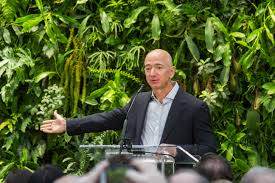 Jeff Bezos, CEO of Amazon and a frequent richest person in the world, made a home purchase making a new record for most expensive home sale. The mansion, located in Beverly Hills, came at a cost of $165 million.

It exceeds the previous record by $15 million. Lachlan Murdoch, an heir of the Murdoch fortune, purchased a home for $150 million last year.

Bezos purchased his new Beverly Hills estate from friend and media tycoon David Geffen. The mansion was constructed in the 1930s for founding Warner Bros. executive, Jack Warner. Often referred to as a “party palace,” the estate features a number of luxury amenities.

The mansion itself consists of 13,000 square feet. Also on the property, two guest houses, a swimming pool, 9 hole golf course, and a tennis court accompany the large main house.

Additionally, Bezos Expeditions, the umbrella company owned by Jeff Bezos, acquired a swath of land in Los Angeles previously owned by Paul Allen, a co-founder of Microsoft. That acquisition came at the cost of $90 million.

The Wealth of Jeff Bezos

Presently, Jeff Bezos has a net worth of about $130 billion. That makes him the current richest person in the world. However, occasionally, when Amazon stock takes a hit, Bill Gates, founder of Microsoft, surges past him.

By measures in billions of dollars, the two stockpiles of cash rise and fall on the waves of fluctuations in the market. However, obviously neither man faces significant financial concern, as their wealth remains steadfastly beyond the average US citizen’s meager earnings.

For example, workers in Amazon’s warehouses previously made on average less than $29,000 per year. Only after intense political pressure from various groups and politicians, like Senator Bernie Sanders, did Jeff Bezos relent and raise the wage of his warehouse workers to $15 an hour.

Amazon faces additional scrutiny over the conditions in their warehouses. Workers report intense stress over strict rules governing their efficiency. Employees incur injury attempting to keep up with the package rates required of them. Safety concerns abound for the low-wage workers, prompting several politicians to pen a letter demanding Amazon improve working conditions.

The estate acquisition’s price tag amounts to less than a quarter percent of Jeff Bezos’s net worth.